Fodder, Fodder, Everywhere and Not a Stop to Think

Talking heads, pundits, bloggers, social media friends, picketers, neighbors . . . they all seem to have something to say about everything. The desire to join in the discussion and make our thoughts known builds and convinces us that we have to add to the noise, that we too must say something, about everything.

Whether it’s division about building walls, about racial inequality, about lifestyle choices and rights based on those choices, about which candidate’s history makes him or her a worse candidate for an office, about candidates calling each other names or endorsing each other, we start to think we must take a side publicly, right now . . . to spout out something pithy, to post a cutting meme, to share a sarcastic blog post that gets a point across in a crafty, clever-sounding, (and usually insulting) way.

It all makes my head spin. Sometimes I want to join in, but mostly I want to drown it out and just drive my son around to find Pokemon, but then I’m afraid I might miss something . . . something I should have an opinion about.

But what would I be missing, really? Mostly a collection of ignorance . . . people yelling at and insulting each other to . . . try to win the other one over? Hmmm . . . Really? How in the world do they think that is going to work? The only ones who read and argue back are the ones who are looking for a fight. And they’re not going to listen, because they’re yelling about their own side, convinced they’re going to win the wayward opponent to the right side, too . . . I guess.

Reminds me of Proverbs 18:2: “A fool takes no pleasure in understanding, but only in expressing his opinion.”

As I’m pondering my deep desire to turn it all off before I too get sucked into the futility and start spouting off (like I really, really want to), I am also considering the value of responding. What are we to do? If we care, how can we stand back and say nothing? So we add to the noise and think we’re helping the cause of whatever righteousness we’re fighting for when we make some quick, clever comeback. But is that pithy response really going to change someone’s conviction? Seriously, who in the world is reading the 735th reply to the 63rd comment on a post about a candidate’s stance on gluten-free food for the military anyhow . . . well, other than me, and if someone IS reading it, is THAT comment finally going to be the one to change that person’s mind?

Reminds me of Proverbs 29:11: “A fool gives full vent to his spirit, but a wise man quietly holds it back.”

I’m not saying we should be absent from the conversation. It just seems to me that we all need to push away the opinion megaphones that are screaming in our ears and think for ourselves first . . . especially before we pick up our own megaphone to start screaming at others! But how can we possibly have our own thoughts if we don’t bother stopping to consider both sides, with open minds and open hearts? If we stop to listen, both sides usually have some valid points. But we have to WANT to hear them.

Reminds me of Proverbs 18:17: “The one who states his case first seems right, until the other comes and examines him.”

I am persuaded the endless streams of opinions that are flooding our lives are indicative of our deep desire to be heard. But is what we are saying adding value or are we just joining in the hot air that is blowing across our nation (maybe the real reason for global warming? . . . not that I’m affirming or denying global warming :-/), adding more ignorance as we guffaw with the other scoffers at the idiocy of the people who think differently than we do?

Maybe we should more carefully consider the end goal. Are we trying to persuade in a thoughtful and winsome way to encourage understanding and growth of others as well as understanding and growth in ourselves, or do we just want to be victorious? If it is the latter, our words are wasted, provoking others, solidifying in their minds how wrong and foolish we are, and only hinder the cause we so desperately want to defend.

Reminds me of Proverbs 15:1: “A soft answer turns away wrath, but a harsh word stirs up anger.”

I pray our nation (and Christ-followers specifically) will become more thoughtful before responding to each other in a way that continues division among us. May we all strive to stop and think before we spew more fodder for others to exploit.

Why I Did It

Sounds very dramatic, doesn’t it? It might be disappointing to realize I’m just talking about going on a trip with my daughter, but that’s it. 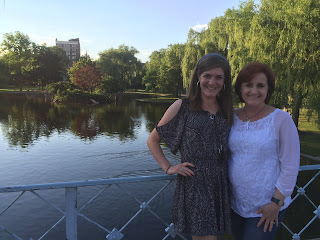 We embarked on a 1500-mile girls’ drive up the east coast to tour 13 colleges in 13 days. Some initial reactions I received were shock at the cost or shock at the fact that two women were doing this alone or questioning as to whether it was a good idea to give my daughter encouragement to move away. Some even did their own self-questioning, as if they were somehow short-changing their children because they didn’t do the same. That surprised me. I wasn’t doing this to make a statement to anyone other than my daughter.

I once heard a pastor ask a church to think of one time they felt really loved. I tended to think of showing love in terms of a consistent self-sacrificing devotion to someone, until that moment. Don’t get me wrong . . . I still think that. But in that moment, as he knew we would, we all thought of something that someone did or said that was above-and-beyond, or at least outside the ordinary. I’m not saying that the normal routine self-sacrifice of devotion to another isn’t the most loving thing you can do, but is that what stands out to the ones you want to show love to? That illustration stuck with me. So, I did it for love . . . to show her I love her enough to plan for months and to stop everything else for only her for two weeks. I hope she felt loved.

I also never even considered thinking outside the box when it was time for me to go to college. I went to the most reasonable option at the time, one that was close to home and wasn’t too expensive. Selfishly, I kind of hope she chooses a college with some of those same criteria. But more than that, I wanted to let her explore her dreams of moving to a big city and doing something completely crazy and out of the ordinary. I want her to dream and believe that she can achieve those dreams and not be caged in by the expected. I know it’s not the most practical, but I hope she was inspired.

Ultimately, I think I did it because I was afraid. Surviving cancer will certainly change your perspective. No longer do you coast through life assuming you’ll live to a ripe, old age. You are well aware of your mortality, that you cannot take one day for granted. Each day is a gift. I often think of the song, “Live Like You Were Dying,” by Tim McGraw. So far, it has not inspired me to go skydiving, but every time I hear it, I am reminded that I have been given bonus time that many others have not been given. It makes me afraid . . . that I will squander that time, that my bonus time could still run out (as could everyone’s), and that those I love won’t have as many special memories of us together as we could have had. So many fears can creep in, but ultimately, I am far more afraid of missing out on the life I’ve been given in the present than the life I don’t know if I’ve been given in the future. So, fear drove me to make memories now, not later, not when it's practical, not when it's safe. In the end, those memories are all our family and friends will have of us.

In light of the almost constant tragic news bombarding us on the airwaves, I hope we will all be driven to show those most important to us an extra dose of love, to inspire them to pursue dreams, and to let whatever fears we have drive us to DO, rather than NOT do. I have others in my life I’d like to show an extraordinary love to and to inspire. I hope my fear will drive me to continue making what could be mundane a lot more memorable! Will you join me?
Posted by Donna at 1:16 PM 2 comments: